CMR Surgical has raised $600 million in Series D financing to accelerate the global expansion and commercial scale up of the business and to help bring Versius® to hospitals around the world. Having supported the business in every round since 2016, Lightrock is excited to invest once again in one of the world’s most promising medical technology companies. 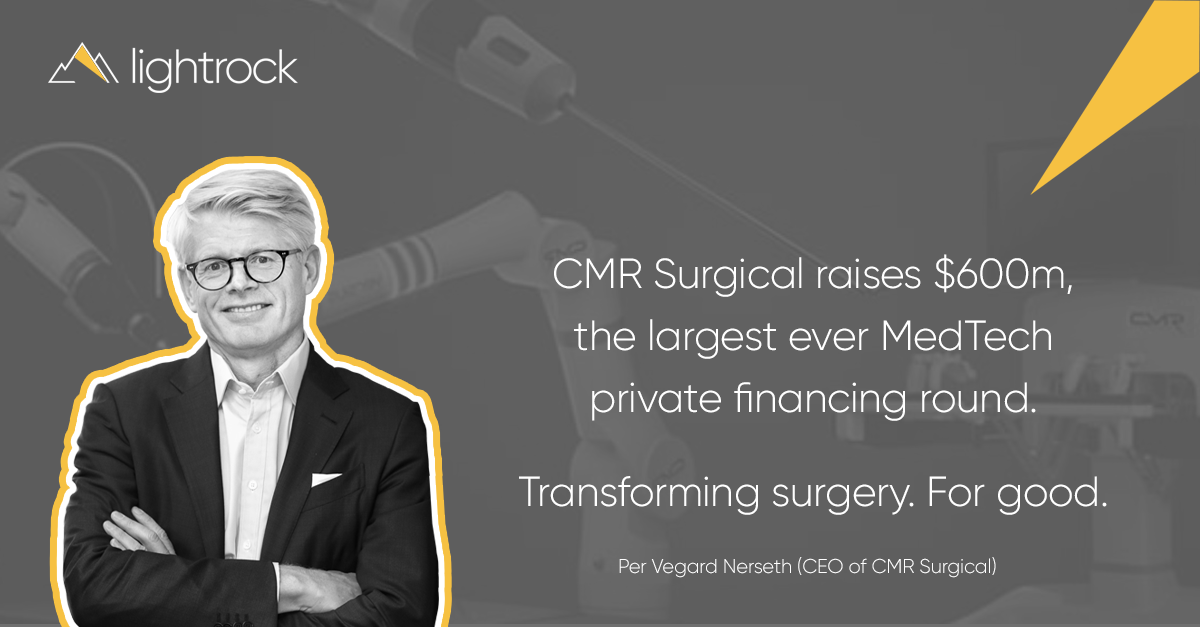 CMR Surgical, a global surgical robotics business, has announced that it has raised $600 million (£425 million) in a Series D financing.  The round was led by SoftBank Vision Fund 2 and co-led by Ally Bridge Group and will support the Company’s mission to make keyhole surgery accessible to more people worldwide. The funds will be used to increase the global commercialisation of Versius®, CMR’s next-generation surgical robotic system, and further develop its digital ecosystem.

The financing was supported by other new international investors including RPMI Railpen, Tencent and Chimera. Lightrock participated in the round alongside other existing investors Watrium, Cambridge Innovation Capital, PFM Health Sciences and GE Healthcare.

Lightrock has been a long-term supporter of CMR Surgical, first investing as part of the Series A round in 2016. Since then, the London-headquartered, global impact investor has participated in each of CMR Surgical’s funding rounds including leading the Series C round in September 2019, (the previous largest ever MedTech fundraising in Europe).

Per Vegard Nerseth, CEO of CMR Surgical, says: “This significant raise will enable us to bring new technology developments, and scale the business so that we can deliver keyhole surgery to more people. I am pleased that Lightrock has been firmly behind our mission from the start, and continues to be a strong supporter of CMR, as we work together to transform surgery.”

Umur Hursever, Partner at Lightrock and Board Member at CMR Surgical, says: “CMR Surgical has significant potential to make a real impact on the surgical robotics market. As an existing investor, we are confident that the Company will continue to disrupt the status quo and transform surgery for millions of people worldwide. CMR Surgical is one example of how Lightrock invests in innovative tech companies that develop ground-breaking solutions to improve quality of life for a large number of people.”

Headquartered in Cambridge, United Kingdom, CMR is committed to working with surgeons, surgical teams and hospital partners, to provide an optimal tool to make robotic minimal access surgery universally accessible and affordable. With Versius, we are on a mission to redefine the surgical robotics market with practical, innovative technology and data that can improve surgical care.

Founded in 2014, CMR Surgical is a private limited company backed by an international shareholder base.

Since 2007, Lightrock has invested in companies that pursue scalable and tech-driven business models around the key impact themes of people, planet, and productivity/tech for good. Lightrock’s portfolio includes more than 60 high-growth companies, supported by over 50 professionals based in 7 cities across Europe, Latin America, India and Africa.

Lightrock is backed by the Princely House of Liechtenstein and LGT, the international private banking and asset management group.

Thank you for signing up.
Oops! Something went wrong while submitting the form.